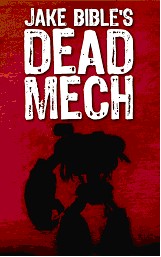 Today’s guest blog post comes from Jack Bible. Jake lives in Asheville, NC with his wife and two kids. He is the author of many published short stories and the creator of a new literary form: the Drabble Novel. DEAD MECH is his first novel and represents the introduction to the world of the Drabble Novel, a novel written 100 words at a time.

Learn more about Jake and his work at http://jakebible.com
Links to his Facebook fan page, Twitter and his forum can be found there, as well as his weekly drabble release, Friday Night Drabble Party, and his weekly free audio fiction podcast.

So, I have had couple of blog posts on my site lately taking some folks to task. The first is about the Us vs. Them mentality right now between indie publishers and traditional publishers. You can find that here. The other post was about those complaining about piracy of books. That one is here.
After re-reading these posts I realized that my issue wasn’t with the Us vs. Them argument or about piracy at all.
My problem was with the whining!
You see, I have two children, ages 8 ¾ and 12. And they whine. Why? Because they are at those ages where they’re being asked to help out with housework. They don’t whine any more than other children their age do. Hell, I know I was a bigger whiner when I was a kid! It’s just that crappy time in life to know how to clean toilets, vacuum the house, put dishes away, scoop the yard (we have dogs), etc. No big deal. They’re kids, whining is part of the process.
My children are both capable and intelligent and it is our jobs as parents to teach them some life skills. But, what about writers? Who teaches them about life skills? Unfortunately, no one does. At least not automatically. You have to read, take classes, find peer groups, and read. (Yes, I said read twice. It’s that important.)
Why am I even bringing this up? Because I can’t stand adults that whine! Get some guts, people! Suck it up and grow a pair or two! Ugh, you are not 12 years old! There is no room in the writing profession for whiners and complainers and victims. This is art, folks. It’s difficult, it’s painful and you are all alone! Get used to it!
Now, before everyone goes all crazy on me, let me explain I am not talking about the writers that like to write/blog about their process. That’s a whole other thing. If you are taking the time to write about the difficulties in your writing then that can only help others learn. Also, I am not talking about venting. That’s human and necessary.
No, what I’m talking about is the “entitlement” whining. The whining by writers that “my work is better than Author A, so I should be just as successful”. The whining that “Author B found an agent in two weeks, but their work is crap and my work is so much better so why can’t I find an agent?”. The whining that “I do everything Author C does and she sells 5 billion books and I only sold 2”.
You know, that crap.
So I am going to apply the same theme to this post that I did to my previous posts.
Listen carefully, this is important, writers.
IT’S NOT ABOUT YOU! IT’S ABOUT THE READER!
Did you get that? Were you listening?
If everything was fair or based on which story/novel/whatever was better then it would be cut and dry. Publishers would only publish perfect works and those works would always sell. But that isn’t how it happens. If an industry that has been in business for a hundreds of years and puts out thousands of books each year can’t figure it out, then why should you be able to?
Most of all, why must you whine about it?!?
Time to suck it up, writers. Understand that THE biggest factor in how successful you are as a writer is, wait for it…LUCK! Right time, right place, with the right story.
Ever heard the term “don’t push your luck”? It means if you try to force it you will lose.
And one life skill I know I’ve learned is this: whiners never win in the long run. They may get some sympathy in the short term, but eventually they piss everyone off and are left alone to wallow in their own self-pity and fail.
Don’t be a whiner, be a writer!
That’s what the readers want.

Posted on April 1, 2011, in Uncategorized. Bookmark the permalink. Leave a comment.