So Jay has gone into hiding once again. Sorry about that. To say I’m sorry, here is a free short story! Free until Saturday that is.

The story, Contrat d’Olivier, is one that I’m very happy with. I wrote it a couple of years ago and it’s gone through a couple of iterations. Everyone that I’ve sent it to in an attempt to get it published, has held on to it for a long time. By a long time, I mean one had it for over a year before finally rejecting it. Another had it once for nine months before rejecting it and recommending a revision, which I did. Then they held on to it for another nine months before I just never heard from them again. So I’m not sure what happened.

Finally I submitted the story to Writers of the Future and was quickly rejected. Hey, can’t win ’em all.

Regardless, I think this is a strong story and threw a cover on it and dropped it on Amazon. Want a copy? It’s free this week. Once the free period is over, it’ll only be 99 cents.

Check it out, let me know what you think. I’ll go work on more stories.

Until Next Time, Stay Awesome!

I realize that I told all ya’all that V&A Shipping II was available, but I never linked to all the places you could buy it. That has been rectified! BUY BUY BUY! WOO WOO!

P.S. If you buy a copy, email me the receipt, I will email you the rest of my books FREE!

I’m so excited I had to type in all CAPS! BILLY BARBARIAN is available everywhere great ebooks are sold! (well, except kobo which seems to be stuck at the moment). So go forth and spread the word! Spread it far and wide! Tell everyone you know! And hey! If you repost, post to your facebook timeline, post on twitter, post in any social media for that matter, and send me the link to your post (or if I stumble upon it) I will send you the coupon code to get the ebook FREE (from smashwords).

And now the moment you’ve all bee waiting for!

And now the moment you’ve all been waiting for! The DRAWING!

Okay, so only a few people are waiting for this. Here’s how it all went down. We had a total of seven entries. Here’s the breakdown:

Now to do it in this manner would be far too simple, right? I had to make this a little more interesting. So here’s what I did:

Third roll was a 1! I was worried there for a minute.

There you have it! I will make sure an email gets out to Beckie straightaway to see what format she’d prefer and send her off some books. A lot of books!

For the rest of you in the contest, I’ve but one question, would you like one of my books? Yes. Just for playing along I’ll let you pick a book from my titles. Just let me know which title and format you’d like and I’ll fire it over to you just to say thank you for coming along.

Beckie! Congratulations! You’ll have many days of happy reading ahead of you. I hope you enjoy the bundle of books headed your way. 🙂

I now return this blog to its regularly scheduled zaniness.

More about the Ministry Initiative 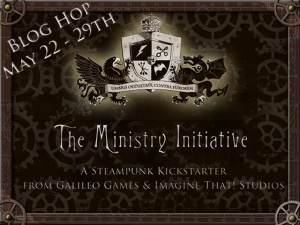 Galileo Games and Imagine That! Studios have teamed up to bring you an ambitious steampunk project! The Ministry Initiative is a two-part creative endeavor that will not only premiere new fiction from the steampunk world of the Ministry but also present a brand new role playing game from the makers of Bulldogs! and the ENnie Award winning game Shelter in Place. Thrill to the tales in Ministry Protocol anthology, or join in as an Agent in The Ministry Initiative RPG.

Find out more about this endeavor and support the Kickstarter here: http://bit.ly/ministry-initiative

I’m very excited about this project for two reasons:

2) I played Bulldogs in high school! BEFORE it was a real game! That’s where V&A Shipping came from. WOO WOO!

So to say I really want to see this happen is an understatement! I’m crazy super extra want to see this happen. I want to see it happen, that I’ll give you a chance to win all my currently published ebooks! That’s right. Just for stopping by here and leaving a comment, I’ll put you in the running. If you tweet about this, facebook it, pinterest it, G+ it, anything, I’ll add you to the drawing. All you need to do is come back here and drop the link to where you posted. That means if you tweet it, add a comment here to your tweet, that’s 2 entries to win! If you facebook it and add a comment to link to your facebook post, that 2 more entries! See how easy this is?

Here’s what you have a chance of winning! 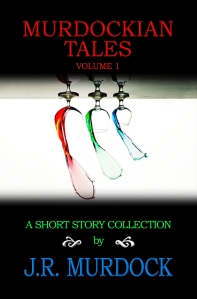 That’s right! Just by leaving a comment (or tweeting or blogging or facebooking or whatever) you have a chance to win all seven of my titles currently available! What are you waiting for? Spread the word! WOO WOO!

Announcement: Ministry working on an RPG

Unless you were living under a rock last year, you know that I was lucky enough to be chosen to write a story for the Ministry of Peculiar Occurrences. (check out my story here and buy a copy for just 99 cents).

Well, big news! The Ministry is raising money to create a Role Playing Game based on the universe they created! I’m super, crazy excited about this. GO HERE! Go HERE NOW! Help this game become a reality! There’s a long way to go and they’re already 1/4 of the way there. I know they’ll make it, but you can get some great fiction, a great game (designed by Galileo Games who are responsible for Bulldogs) (Side Note, Bulldogs was a game some friends of mine created in high school that the characters from V&A Shipping came from).

As I said, I’m really excited about this. This is HUGE! I hope you’ll take a moment, check it out, and throw a few bucks their way to make this happen. I can guarantee it’ll be a great product.