As I said yesterday I’m on a mouse hunt. This will be a reward for getting to the halfway point of my goal for the year (225,000 words is the halfway point). Not only that, I’m currently 20 days ahead of schedule. I’m very proud of that. This mouse hunt is to make my right hand more productive. I want/need more buttons than my current mouse offers to allow me more flexibility and to one click tasks that currently require multiple keystrokes and mouse click combinations. As any good gamer knows, the less clicks, the quicker you can get things done.

This will be my initial thoughts on a new mouse I will be purchasing. If you have feedback on any of these mice, I’d be glad to hear them. If you’re not interested in mice at all, you may want to skip this post. There will be more tomorrow on me, my writing, and ducks.

My current mouse is the iHome Five-Button Cordless Laser Mouse. This is a great mouse. I’ve had no complains. The battery life is incredible. It has an on/off switch. It’s got the (now standard) five button cifiguration (actually 6, but one is hard to press on the fly) plus a DPI switch from lots of DPI to little DPI. It also has some nice software to configure all the buttons except for the wheel tilt. I’ve reprogrammed two of the buttons but would like more flexibility with my mouse. http://www.amazon.com/iHome-Five-Button-Cordless-Laser-IH-M827ZB/dp/B0046XVW7C/ref=sr_1_1?s=electronics&ie=UTF8&qid=1337271201&sr=1-1

Fist up (and probably my favorite choice) is the SteelSeries WoW Cataclysm. This thing has a whole lot of programmable buttons. It’s got five thumb buttons, three index finger buttons, three middle finger buttons, one ring finger button, DPI button, and the mouse wheel plus click. I’m not sure if it has tilt click or not. It also allows you to take multiple configurations as well as onboard memory to save the current configuration. That means I could drag this thing from one computer to another and not have to have a profile on each computer. I really like that. Only complaint I’ve seen about this one is the size and looking at the videos I don’t really think that’ll be an issue. http://www.amazon.com/SteelSeries-World-Warcraft-Cataclysm-Gaming/dp/B004GZ2RCY/ref=sr_1_1?s=electronics&ie=UTF8&qid=1337271538&sr=1-1

Next is the SteelSeries World of Warcraft Legendary. This is considered the smaller brother to the Cataclysm. It has a couple fewer buttons, but to be honest, I’m not a fan of the look of the mouse. I’m sure it works great, but the big old WoW logo on it is a turn off for me. I don’t think I’d want to look at that all day while I’m working (like I said, I want this mouse for work AND play). It’s got a similar layout to the Cataclysm and is slightly cheaper. http://www.amazon.com/SteelSeries-World-Warcraft-Legendary-Gaming/dp/B005L38QHA/ref=sr_1_3?s=electronics&ie=UTF8&qid=1337271538&sr=1-3

The Cyborg R.A.T. 7 (or 9 if you want wireless). This one looks to be a highly configurable mouse with so many options, styles, adjustments. I could probably spend a week just getting used to all the different ways to attach all the pieces and weights. The software to program it looks easy to use. It’s got a scroll wheel and a thumb wheel as well. This one looks weird and I love that about it. This thing looks CRAZY! It’s also highly customizable, but with fewer buttons. http://www.amazon.com/Cyborg-T-7-Gaming-Mouse-MAC/dp/B003CP0BHM/ref=sr_1_1?s=electronics&ie=UTF8&qid=1337271735&sr=1-1

The Cyborg M.M.O. 7. This thing is intended for MMO players. It’s got a LOT of buttons just like the Cataclysm. It’s also higlhy modifiable just like the R.A.T 7. The biggest difference? The price. It’s nearly twice the price as the Cataclysm. Other than the price, I love everything about this one. If it were a tad cheaper it’d be a top contender. Heck, it still might be. We’ll just have to wait and see. http://www.amazon.com/Cyborg-M-M-O-7-Gaming-CCB437130002-04/dp/B006LVZEN0/ref=sr_1_1?s=electronics&ie=UTF8&qid=1337271921&sr=1-1 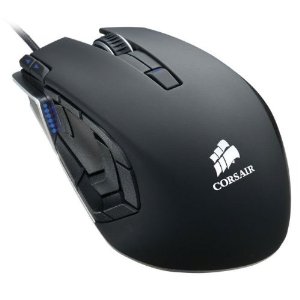 The Corsair Vengeance M90 looks to be good competition for the Cataclysm based on stats alone. The biggest downside I see is that a majority of the buttons are thumb buttons. The layout looks better than other mice with multiple thumb buttons, but I’m a ‘claw’ mouser so I don’t want to have to rely on my thumb agility for every mouse click. It does look like a great mouse though. http://www.amazon.com/Corsair-Vengeance-Performance-Gaming-CH-9000002-NA/dp/B005QUQP8A/ref=sr_1_23?s=electronics&ie=UTF8&qid=1337272045&sr=1-23

The Logitech G700, on the other hand, has more buttons and is wireless. Both pluses. I’m sure I could get used to the button placement. It’s also a very nice looking mouse. It has five more buttons than my current mouse (possibly six more). I’ll need to read more about this one before I make a final decision. http://www.amazon.com/Logitech-Wireless-Gaming-Mouse-G700/dp/B003VAM32E/ref=sr_1_3?s=electronics&ie=UTF8&qid=1337272188&sr=1-3

Finally there is the Razer Naga Hex. Much like the Razer Naga, a majority of the buttons are thumb buttons, but in a much better layout. I like that. This makes it far more desirable than the Naga as I would get confused with a grid layout of buttons. A nice looking mouse as well and I’m sure it’s quite comfortable. http://www.amazon.com/Razer-RZ01-00750100-R3U1-Naga-Hex-Gaming/dp/B006W3ZXEW/ref=sr_1_4?s=electronics&ie=UTF8&qid=1337272376&sr=1-4

So I’ve got a LOT to think about. I know that no matter which mouse I choose, I’ll be getting a batter mouse than the one I currently have. It’s a lot to think about and if you have thoughts, feel free to drop them into the comments. Help me figure out what prize I’ll get for hitting 225,000 words this year.