I like me some old black and white horror. I really do. 1951 gave us The Thing from Another World. A classic movie about finding a crashed space ship in the Antarctic ice. They also find a pilot. The ‘thing’ they find turns out to be some sort of man-shaped beast that wants to kill every one. No real reason why. The manage to grow some new plants that breathe and destroy them with electricity. Well, guess how the kill the man-sized ‘thing’? No real surprise ending, most of the crew makes it back home safely.

Wait? What? If everyone lives and they had this alien craft… but but but!

Thankfully this movie died a timely death and it wasn’t until 1982 that anyone really gave it much of a thought. Well, I’m sure John Carpenter did. I’m sure he must have seen the Blob as well (see yesterday’s reviews). Only he took it a few steps further. Rather than a plant from space or even a lump of digestive jelly, he made a creature that could take on the shape of anything it touches.

The movie starts with a helicopter chasing a dog. Norwegians shooting and trying to kill this dog. Why? Why would they kill this dog? Stop trying to shoot the nice animal.

Oh! It’s a monster. The Crew only figures this out after visiting the Norwegian camp (no radio contact?) and find it mostly burned to the ground with oddly shaped masses burned and unrecognizable. They find the map to the space ship, see the block of ice it’d been frozen in, and all that.

Back at camp this things starts to kill people off slowly. Okay, not that slowly. It’s pretty efficient at mimicking and killing. Doesn’t some really cool transformations as well. Of course, in the end, the last two remaining crew drink a bottle as they watch the camp burn. 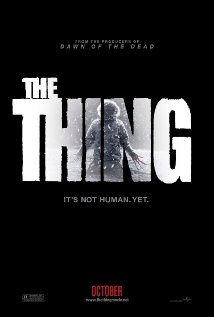 2011 brought us a PREQUEL! This isn’t often done and to be honest I was a little excited. Sure the cast was mostly nobodies (okay, no names I can recall at all) but regardless, it was a prequel to John Carpenter’s The Thing! What could possibly go wrong.

They did a good job. I have no real complaints except that I kinda knew what to expect going in so there was no suspense and I wasn’t caught by an BOO! Moments in the movie. I hate BOO moments not because they scare me, but because they’re an over used trope. At least they didn’t put a cat in the camp. I probably would have stopped watching if they’d done that.

All in all the 1982 Thing is my favorite of the three by far. Yes, it has BOO moments, but it doesn’t rely on those to get the point across that this thing is scary and will kill you. Just like Alien, it’s a horror movie in the best possible sense.

Maybe I should write my own sequel to the Thing. Hmmm… yeah, right after I write my Blob sequel.