Much better day today. Had I been in the chair more than I was, I would have gotten more than 1000 words written, but given how little time I spent actually writing, I’ll take those 1000 words. Darn election coverage.

Yes, this puts me behind on my NaNoWriMo goal and my November goal in general. I will have good days coming up. That much I know. At least I’m keeping the streak alive with getting words down every day, no excuses. Writers write. That’s #1. I’ll work on the rest of Heinlein’s rules in the coming months.

Busier than normal day today with the day job. One of my co-workers is out so I’ve been testing/troubleshooting something he’s been working on. Since I’m fairly new to what he’s doing, it’s a steep learning curve. Combined with doing End-of-the-Year goals and finishing off some training, it’s been fun.

Helped My Favorite Daughter build a garden box for her ginger plants. They were getting constrained in the pot they were in as they like to have room to run. Picked some peppers from my pepper plants. No idea what kind they are. Some are crazy spicy, others are good and flavorful.

Spent the early morning hours with a playful puppy. Below you will find a few pictures of Koda (the teacup Yorkie) and Orea (the Lasa Apso). Tootsie, our oldest puppy at 14, is mostly blind and mostly deaf and the puppy scares her so she avoids her as much as possible. Hence, I don’t have a picture of the two of them together yet. I have found them laying next to each other a few times, but when I try to take a picture, the puppy, ever curious, will follow me.

Speaking of training, I signed up for Scott’s Bass Lessons. I figure if I’m going to toy around on the instrument, I may as well learn how to really play it. I’ve learned a number of songs already and it’ll be nice to fill in the large knowledge gaps I’ve got.

Also, along the training vein, I’ve signed up for a few of Dean Wesley Smiths online lecture series.

I might be coming up on 50 (don’t let the photo on the blog fool you, I was 35 in that picture) but I will be a life-long learner.  I don’t think I could spend my life not learning something new.

Speaking of something new, I need to go refresh my brain. 4am comes early and if the puppy stays asleep, I might knock out some early morning words and get back on track with my word goal for November. 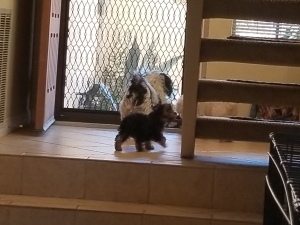